At Maloney, Reed, Scarpitti & Company, LLP, we know that every company is unique in the way they conduct business and pursue corporate vision and mission. This is why we provide a full range of services tailored to meet the various needs that companies have when it comes to the following: 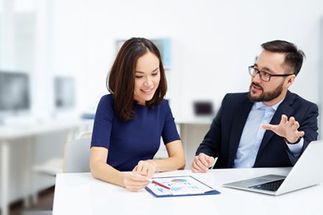 Through strong partnerships with our clients, we help businesses manage accounting tasks and also enable them to achieve sustainable growth. By combining dynamic solutions with seasoned accounting expertise and knowledgeable business acumen, our clients have peace of mind knowing that their financial future is in good hands.

We Are Always Hands-On

Whether you are running a small business or a nonprofit organization, we make our years of experience in auditing, review, and compilation work for you.

Filing your tax returns need not be overwhelming when you turn to us for assistance. Rest assured that we would be with you in every step of the way.

Protect your business with our fraud examination and review service. We help resolve allegations as well as guide you in implementing safety measures.

Let us be your partner in your growth. We offer consulting services for businesses, nonprofit organizations, government offices, and individuals.

Always for the Long HaulWe have been in the business for more than 43 years and as a matter of policy, we focus on establishing long-term relationships with all of our clients. We follow the same philosophy when picking the people to work with us: only the best, brightest, and most committed. Most of our employees have been with us for years.

The Big MoveIn 1984, the firm of Maloney & Reed merged with the accounting firm of James Scarpitti to form Maloney, Reed, & Scarpitti. The merger included Scarpitti’s offices in Edinboro and Erie. As the firm grew, more office space was necessary, so the company had to move to their current office locations.

The Firm EvolvesRick Clayton came aboard the firm as an accountant in 1987 and became a partner in 1993. Maloney, Reed & Scarpitti then evolved into Maloney, Reed, Scarpitti & Company. The Corry office on Enterprise Road was established and housed three offices for MRS in 1995.

New PartnershipsThe firm became a limited liability partnership (LLP) in March of 2001. In July 2015, Chris Elwell became partner. Chris had been an accountant with the firm since June 2007. On October 1, 2016, Mike Reed retired to enjoy his winters and tax seasons in Florida.